We all have come across people in our lives where the chemistry is so instantaneous and intense, the connection becomes undeniable. It’s the sudden realization that your path is crossing this other person’s path, and for a specific reason. While that reason can take weeks, months, or possibly years to be determined, the reason is always there… waiting. 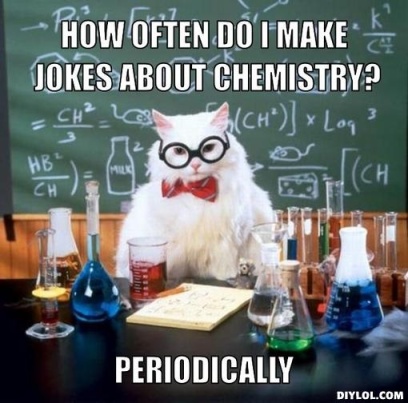 Chemistry jokes make me giggle… even if I did fail the class miserably in high school.

Back at the beginning of 2010 when I met my guy, it was pretty certain our fates were destined to cross… and all for the purpose of love. But I was wrong… so terribly wrong. In fact, it took three and a half amazing years together to understand the real purpose of our paths crossing.

It was early this past Saturday morning and all was calm throughout the apartment. I had tossed and turned a few times with my typical 6:30am wake-up time plunging into my sleep and dragging me out ruthlessly. As I began my weekend routine (thinking about coffee and weighing the pros/cons of getting out of bed to use the restroom), sounds from the kitchen suddenly drew in my attention.

The first suspects were my Siamese-mixed pair of felines who tend to practice their auditions for WWF on the weekend. 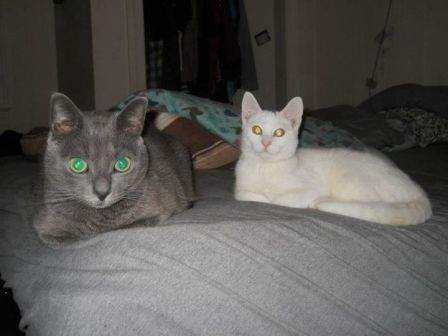 Don’t glance into their eyes. They’re busy collecting human data to report back to the mother-ship. And they’ll suck your soul out. No big.

A quick glance at the bureau showed the kitchen rustling was not Siamese-created. The older, female cat was disdainfully staring at me from her perch on the bureau, rightfully requesting (telepathically) to check out the ongoing ruckus. A quick toss of my arm over my head confirmed the noise wasn’t dog-related either. My loyal morkie lay passed out, snoring happily above my head.

Enter the moment I began poking my guy in the side, urging him to check out the noises. While the immediate danger was minimal, his help was still required due to my lingering fear from a disgustingly large intake of murder and crime related shows late at night.

A half-asleep shuffle into the kitchen by my guy, mixed with one alarming “Oh. My. Fucking. God.” announcement later, I flew out of bed with my three animals in tow to face the horror.

This encounter, sadly, would have been favorable.

Not only was there a squirrel in the kitchen, but said squirrel was maniacally throwing itself about like a bouncy ball trapped in a room full of rubber walls. I watched in horror as the rodent-like body scattered across the kitchen counters, smashing dishes and toppling silverware every which way. He even took a moment to tour our bathtub and cat house. How thoughtful.

“Call the fire department!” was my first line of defense to my guy, as he dashed from side to side in attempts to out-step the squirrel, all the while using up the energy pulsing from his nervous reaction.

The loud sound of scratching nails and frantic searching for an escape echoed through the kitchen as I rounded up the animals, yelling nonsense about rabid squirrels attempting to attack my furbabies. My guy tentatively ran in and out of the kitchen, as I recklessly threw out my plans.

Reckless Plan #1: “Okay, I am going to run into the kitchen, throw open the laundry room door, then throw open the back outside door. I’ll run back in and the squirrel will run out!” Hmm, a rational idea, except for overlooking the small fact I would have to run back through these three doors, all while attempting to not be blood-sucked by the squirrel.

Reckless Plan #2: “We’ll trap it!” I must have forgotten I don’t act as runner-up for The Turtle Man on weekends, and I don’t trap rabid animals with my bare hands, backwoods style. 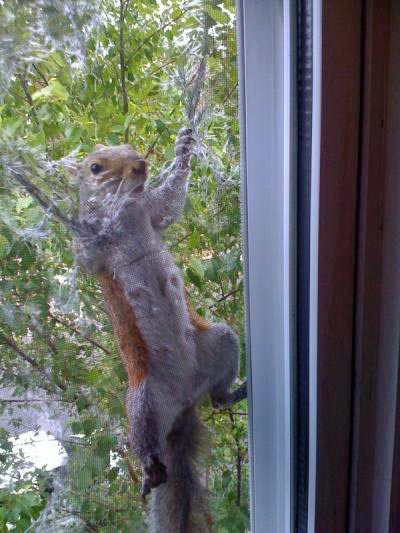 But with four loud chomps and more nails-on-a-chalkboard scratching, the squirrel was gone. My guy and I looked at each other in astonishment, both of us taking a second to rationalize what had happened, and each silently questioning ourselves if the entire event was a delusion caused by early morning wake-ups on the weekend.

The large chewed hole in our screen window suddenly illuminated as both the entrance and exit of our ninja-mocking squirrel. And the hours of laughter and conversation that followed this ridiculous event solidified that the squirrel experience had occurred, and neither of us were suffering from delusions of grandeur or rodents.

But most of all, the entire frantic experience brought to light the reason for the chemistry between us. We weren’t brought together for the purpose of love.

We were brought together to work as a team through crazy situations, work as alliances when facing enemies, and work as best of friends to laugh over the subtly mishandled adventures of our life.

21 responses to “When Fates Collide.”

Time to share a tale of your own... Cancel reply